Depending on the size of your organization, it is extremely likely that most people will not be present.  It is neither practical nor desirable for everyone to be involved in every decision.  As group size increases, the necessity for allowing individuals to choose what decisions they want to participate in becomes essential.  These systems also keep group size manageable.

Criteria for consulting the whole group:

While such criteria are helpful, a complete structure would also include options for when a decision does not meet criteria.  A flow chart can help guide the path any idea from inception to implementation.  Below is one possible structure. 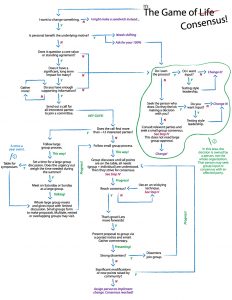 Where does voting fit in?

For large organizations or those spread across distance (national clubs, fortune 500 companies, cities, states, nations), consensus of the whole population ceases to be an option. Here a representative form of consensus may be used.  These systems often include models of sociocracy  or dynamic self-governance.

There have been successful communities with several hundred thousand people that used representative consensus, with what, in ideal, the American founders had mostly in mind.  That system has been transformed overtime, primarily with the focus on “I” instead of the “we.”  Ideally, the large group knows the small group holds everyone’s intentions and the values/goals of the community dear.  While individuals may feel strongly in opposition to a small group’s actions/decision, they still hold that the action taken was done with pure intention.

This nature of trust and practicality becomes progressively more necessary as the group size increases.  Newer techniques like “open space technology” allow for larger numbers to be considered.  Very roughly, with more than one hundred people, representation becomes necessary.

The Bay Area NVC in San Francisco uses and enormous matrix.  Along one axis are 25 decision categories, these include areas such as marketing expenditures greater than $X, marketing expenditures less than $X, project XYZ, conference scheduling, etc.  Along the other axis is every member’s name.  For each decision category they indicate whether they would like to “be fully involved”, “consulted initially and review proposals”, or “trust the decision of the group.”

At Namaste Solar in boulder Colorado, the organization began using a mandatory consensus model, in which everyone contributed to every issue.  As they grew, they moved to consent model.  At each company meeting, proposals where shared, and individuals can offer a thumbs up, thumbs down, or abstain from voting.  Any issue that received at least one thumbs down would be tabled for discussion by a smaller group.

Another method is to create agreed upon criteria for what decisions are made by consensus, and which ones are “role decisions”.  Role decisions are trusted to the person who oversees that domain.  They can always be challenged.  If so, the role decider and the challenger work to reach consensus, but the whole organization need not be consulted.